I’m back with another poem for your languid perusal!

It was written based on this photo, which I took at the Fairy Glen at Isle of Skye, in Scotland. 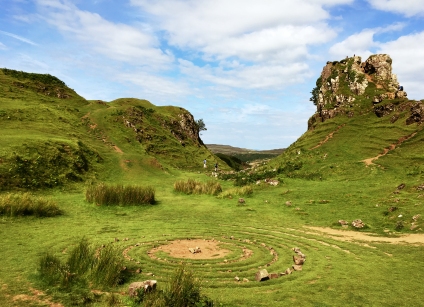 I am by no means a photographer, but I do so try my best.

Scotland is absolutely beautiful; I cling to the memories of walking amidst castle ruins and rambling aimlessly down rolling, dramatic landscapes.

Have you been there before, or perhaps live there? Do share your experiences! 🙂 And I hope you enjoy my poem.

Some time ago, I went on an amazing trip to Scotland. I visited the Fairy Glen in Isle of Skye, and the picture above is evidence of that. No doubt, I am no photographer, nor did I go at dawn … END_OF_DOCUMENT_TOKEN_TO_BE_REPLACED

I’m back with a poem, in which I ponder our blinkered existence. On that happy thought, away we go! Fish Eyes I once crossed a frozen lake at the Swedish border. Wind whistled over the white lands; frost feathered the … END_OF_DOCUMENT_TOKEN_TO_BE_REPLACED

Hi! Here’s a poem for your perusal, definitely longer than the previous one!

It’s called Fish Eyes, which sounds really strange. Let’s hope you can make some sense out of it.

Some updates about my life will be coming up soon, so keep an eye on this space.

Here is a fun little poem using the iambic rhythm (4-3-4-3) that randomly popped up inside my head. Bed and Breakfast There was a man who overstayed and did not pay his dues; we steamed his rugs and then him … END_OF_DOCUMENT_TOKEN_TO_BE_REPLACED

Hey, you. I’m back, after an agonizingly long hiatus. I did post a poem a few weeks ago, but other than that, it has been a dry spell. No, not that I’ve stopped writing; rather, I just can’t find a right topic, or something to discuss on this section of my blog – The Life of Me. It’s been pretty usual and routine, really. And that is just sad, isn’t it? Heh.

I guess I could talk about the new Harry Potter film, The Crimes of Grindelwald. But I have not watched it, so no need to worry about spoilers here. As a Harry Potter geek, I like to compare the ‘first dark lord’ with the second, AKA Voldemort. Grindelwald and Voldemort have very different childhoods, yet they both became ambitious and power-hungry people, and killed muggles for sport. At this point, I find it pertinent to note that I am not speaking with the authority of an expert in psychology, or anything fanciful like that. I am just a basic Harry Potter geek. Emphasis on basic.

But as I was saying, the backstories of both villians are vastly different – Grindelwald grew up with friends and family, while Voldemort had none of that. In that sense, could Voldemort’s actions be attributed to his upbringing? This topic has been greatly discussed, and I have read many theories, of how Voldemort cannot love because he was conceived under a love potion, which was a symbol of how he came from ‘a loveless union’, as JK Rowling put it. She adds that everything would have changed if he had been raised by Merope (his mother) and had been loved by her. Yet, we know that she died after giving birth to him in the orphanage.

I guess this ties in with what I’m trying to say – that we can all receive and reciprocate love because we have been first loved by someone. As a Christian, this resonates strongly with me as we realise that we can show love towards others because of God’s great love that was given to us.

God lovingly created us and the world, and made us that we may rule the world under Him. He made us such that we may have a relationship with Him. Yet, we tried to do things our own way, and made ourselves rulers, turning away from God’s perfect rule. But no human is perfect, as Romans 3:10 tells us ‘None is righteous, no, not one’. And so, our sinning, that is, our rebellion against God, has made a mess out of the world. As seen from the state of today’s world – broken relationships, abuse, and all that – we truly have made a mess out of it all.

But God won’t let us rebel against Him forever, and the consequence of sin is death. As we rebel against Him, our previously perfect relationship with God has been broken. When we sin, we are telling God to go away, because we want to do things our way, and not God’s way. But God is the source of all good and life, and when He leaves, all that is left is evil and death – a desolating place. Also, because God is just, He cannot stand by and watch us make a mess of the world – His world. We are to face His punishment – death.

But because God is also loving, He sent His son, Jesus, who was fully man and fully God, to die for our sins, and to take His punishment. I have known this fact for a long time, yet, I still marvel at this great and amazing and honestly quite unimaginable love of God. That he had made plans to save us from death, even as we were going against Him. But really, who on earth has that vast love? Honestly, I don’t think I’d be willing to die for just one stranger. Yet, Jesus loved us so much that he died for everyone.

‘For Christ also suffered once for sins, the righteous for the unrighteous, that he might bring us to God…’

Jesus was the perfect and unblemished sacrifice – because he never once committed a sin, although he was fully man and experienced the same troubles as us. He was the only one who lived under God’s rule and didn’t deserve to die. Yet, he chose to take our place, taking God’s punishment that was meant for us. His suffering was once and final, cancelling the need for future sacrifices, as he was perfect and did not deserve death.

But in doing so, Jesus mended the broken relationship between God and us. We can now pray, as in, speak, directly to God because we are now made right with Him!

‘In his great mercy he has given us new birth into a living hope through the resurrection of Jesus Christ from the dead.’

It didn’t just end in Jesus’ death. God raised Jesus to life after the third day, thus conquering death (the consequence of sin). Jesus now offers us new life, and will return to judge us. And because Jesus has taken God’s wrath upon his own shoulders and pardoned us, we can be confident that we will be acceptable to God in face of judgement. We can be sure of this, because we did nothing previously in order to be pardoned of our sins, and yet Jesus still died for us.

But how should we receive this?

We can go back to rejecting God and trying to run our lives our own way, but the consequence of that would be as aforementioned – facing the condemnation of God, and death.

Or, we can acknowledge that Jesus is our ruler and live under his rule, knowing that we are blameless now that Jesus has died for us and has been resurrected. The consequence is that we will not face God’s wrath, but will be given eternal life instead.

‘Whoever believes in the Son has eternal life, but whoever rejects the Son will not see life, for God’s wrath remains on him.’

This probably sounds rather frightening and threatening and confronting to you. Or maybe you are already striving your best to live under God’s rule. Or perhaps you’ve made a loud snort of derision, and dismissed this as a load of hogwash. I mean, who has ever heard of a guy coming back from the dead, after three whole days?!

It sounds impossible to us humans, but to me, God is so sovereign that such rules do not apply to Him, as He was the one who made them. And then again, there have been many eye-witnesses of people who saw Jesus after his death.

So, I think that God has shown us such a great love, that we can’t do anything else but to share it with others, and also sharing this hopeful message that all is not lost (the gospel), to those who may be unaware. As is emphasised consistently throughout the bible:

If you want to know more about the gospel, or if you find what you’ve read familiar, it’s because it comes from Two Ways to Live‘s presentation of the gospel. Give it a peek, because there are illustrations too! 🙂

I am not here to change minds or to convince you of anything, because I really don’t have that ability! I just think that we are capable of showing love because others have shown us love, in one way or another, and as a Christian, this points me towards God’s amazing love. What do you think? If you have any questions, feel free to drop me a message!:)

All in all we’d done quite a good job — the sunglasses, the workers’ vests, the guns — purchased from an alcoholic slob. We’d even swiped an extra magazine from the desk when he was smoking pot. We were perfect … END_OF_DOCUMENT_TOKEN_TO_BE_REPLACED

I slither down the drain, Hitting the watery depths with no pain I can smell things a mile away And can be smelled just in about the same way I am the King of my unwanted empire, Wanted though, with … END_OF_DOCUMENT_TOKEN_TO_BE_REPLACED

Author’s note: Hi! Here’s a poem for you… I actually gave this poem loads of thought. This poem stemmed from a painting I created in my head, and then my muse tickled me into writing this. The first words that … END_OF_DOCUMENT_TOKEN_TO_BE_REPLACED

If I could give you a tonic, That could make you laconic, Then perhaps it’ll cure my ear ache, And reduce the buzzing in my head. You won’t go on and on, In an attempt to explain an un-wrong, And … END_OF_DOCUMENT_TOKEN_TO_BE_REPLACED

Author’s note: So, a poem on sarcasm. This poem only represents the icky part of sarcasm. I think sarcasm can be really, really funny sometimes, if used in small, cautious amounts. This poem might not be meaningful or anything, but … END_OF_DOCUMENT_TOKEN_TO_BE_REPLACED

The text used for my piece of blackout poetry is the poem ‘Love song, with two goldfish’ by Grace Chua. Go check it out! 🙂 I love the fish- related metaphor! 🙂 You can find it here. So here’s my … END_OF_DOCUMENT_TOKEN_TO_BE_REPLACED